So we are changing the way we eat in this household.  I’d like to tell you it’s because we crave a healthier lifestyle, which we might, but really it’s just because it’s more cost effective.  In turn, we probably eat way less and eat far better than we would if we were going out all the time.  Our portions are smaller and what goes on our plates is probably prepared a little healthier.

I do most of the cooking in this house, but I am not the cook.  In fact, my husband is a far better cook than I am.  And he guest stars in our kitchen every once in a while..usually when there is steak involved mostly due to my previous uh, beef jerky situation.  But I do what I can.  Most of what I make is edible but not always enjoyable.  More often than not my kitchen (and well, the rest of our tiny house) fills with smoke.  Which to my defense is due to poor ventilation in this house, I swear.  But none-the-less, in the eight months we’ve lived here the smoke detector has never sounded.  Not once.  Until tonight that is.  Uh, guys?  Did you know smoke detectors no longer just beep at you but they speak too?  Fire! it shouted.  FIRE!  No!  No.  There was no fire.  Hush little beeping man.  Hush your mouth!  You’re getting everybody all excited.  Even poor little Bailey who was sleeping off her sickly feeling from the vet’s office where they poked her with her booster shots.

But alas, I’ll share with you tonight’s dinner because it was just that good! Even with the smoke alarm sounding.  I am not creative in the kitchen at all, and even most days I can’t follow a recipe for the life of me.  But I’ve been trying.  I get recipes from all over the place but recently my favorites come from this blog.

Tonight I made half of this recipe, mostly because I knew the other part wouldn’t get eaten in this house because we’re just not that fancy and prefer steamable veggies from a bag.  But I digress. 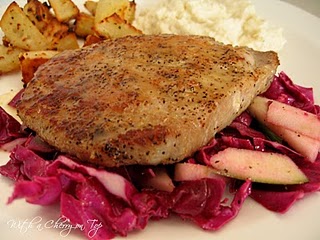 Directions
In a medium bowl, add the cabbage, apple and scallions. Mix in lemon juice and toss to coat. Add in 2 Tbsp. olive oil and vinegar; toss to combine. Refrigerate until ready to serve.

In a large non-stick skillet, heat remaining olive oil over med-high heat. Season both sides of the pork chops with salt and pepper to taste; carefully add to skillet. Cook for approximately 8 minutes on each side and remove pork chops from pan, allowing to rest.

Pour chicken stock into the pan and using a whisk, begin to scrape bits of pork left on the pan, mixing into the stock until well combined. Bring to a boil and then reduce heat to low. Add in mustard and honey; stir to combine. Cook on low until heated through (about 3-5 minutes). Add pork back into the pan and let reheat in the sauce (about 3 minutes).

I hope you pay her blog a visit because her recipes are delish and her posts are entertaining.  And for an elementary cook like myself, she has plenty of recipes that are challenging enough but not so difficult that I don’t even attempt them.  I’m already excited to eat the leftovers!

I am a writer who loves to explore all different types of relationships. I am most happy when surrounded by my loved ones and furry children. I've never met a stranger, and I talk way too much. My favorite things to do are eat {preferably at a restaurant} with good friends, write, watch DVDs of TV series {especially FRIENDS}, drink lots of coffee and learn.
View all posts by JoElizabeth →
This entry was posted in marriage and tagged delicious, elementary cook, endeavors, fire, food, recipe, smoke. Bookmark the permalink.